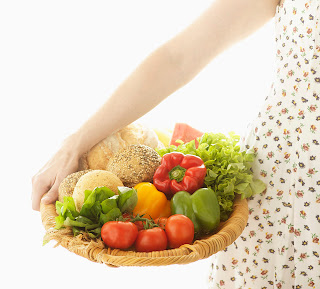 I really used to think that the whole “organic” trend would blow over before I was ever tempted to jump on board. That was short lived. After watching a show on TV about how much preservatives and pesticides we ingest into our bodies I began to wonder if going organic really was better for us. So, about two years ago, I asked that question of dozens of people and was surprised at the variety of opinions that surround the subject. Most made good points but I was looking for solid facts and it literally came down to one:

Buying organic is as close to the way God created it as it gets. There are some things that just aren’t meant to be ingested.

But why? Isn’t the regular produce okay to eat?

The answer is, “not always.”

Most foods are grown with the use of harmful pesticides and dairy and meat products are infused with hormones that were given to the animals to speed up and bulk up their growth. These added chemicals are harmful to us. No one would dare ingest cyanide yet, it is found in some pesticides. It makes me thankful that I wasn’t a big vegetable and fruit eater until recently. Yeah, mama never made me eat my veggies unless you count the tomato sauce on Ravioli. That was about the extent of my vegetable intake.

When I started to switch over to an (semi)organic lifestyle I began to realize how much of a dent it can put in your wallet, if you know what I mean. Still I wasn’t willing to give up the healthy aspect and besides, there is an obvious taste difference when it comes to fresh, natural food. I was looking to stay healthy and not go broke so I researched further and I discovered a couple of things.

By following the lists above and only buying organic the products that I needed to saved a good bit of money. I also found that using coupons and reward cards helped as well.

Here is a download for a grocery list that I use when shopping. I designed it so that the items that should be purchased organic (as recommended by nutritionists and physicians) were easy to recognize. They are italicized. While I understand that some may disagree with one or the other, I’ve done much research and read many reports on what items to include. You can always add more or take away. The box is to check it off once it is in your cart. I prefer this to scratching it out because it is easier to scan. The line immediately after the box is for quantity. If you need 2 jars of stewed tomatoes then write a “2″ on that line.

NOTE: Fonts used are Lainie Day and Courier New. Install them on your computer before downloading printables.