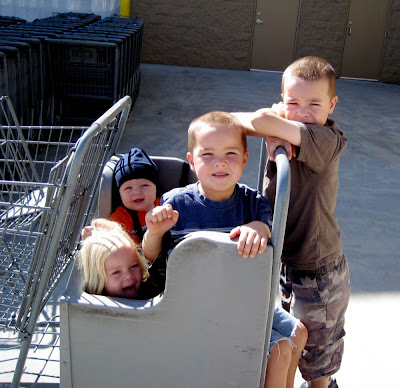 I think taking the kids with me on my grocery excursions is a valuable thing to do. However, that doesn’t mean it isn’t exhausting.

Since my kids are homeschooled, they do need to get out just as much as I do and  they think going to the grocery store is a grand day out.  I think it counts as a field trip and “real life learning.”

Over the 8 years I’ve been grocery shopping with kids in tow (now 4 of them, plus one in the oven), I’ve learned some tricks and techniques:

Oh, also, it is a kindness to make sure the children are fed and watered before leaving. Its budget-trouble when the grown-up shops hungry; it’s meltdown-trouble when a toddler shops hungry.

As soon as they are even remotely capable, give the children jobs. They love to help, to be needed, to contribute. My kids have

A great byproduct of having the kids help out in these ways is that much more frequently than “You’ve got your hands full,” I hear from fellow shoppers, “Looks like you have a lot of helpers!” My theory is that people just feel like they have to say something when it is obvious that they’ve noticed you, so they say the easiest thing, the first thing that comes to mind. They aren’t usually trying to be irritating or negative, they just say what comes naturally. If it is the children happily helping, they tend to comment on that rather than their sheer number.

That has, at least, been my experience, in a town where 3-5 kids is common, people are friendly, and where I don’t have an unusually large family.

One important thing I have noted over the years is that, for the children, behaving and helping at the grocery store is a skill that gets better with practice and declines when not practiced. So if I want to be able to take the children with me to the grocery store and maintain my sanity and blood pressure in the process, I need to take them several times a month — that is, more often than not. When they are accustomed to the errand and know the routine, it’s actually usually pleasant to have a couple extra sets of hands to help.

(If you’d like to save your sanity in the kitchen, purchase your own copy of Mystie’s excellent e-book, Simplified Dinners.)

Read more on this topic with these posts!

Growing up, Laurie’s dream was to become a wife and Mama. That dream came true over 28 years ago when she became the wife of Toby, her Honey. Thankfully, Laurie’s dream to become a Mama has also been fulfilled as they have been blessed with 5 children, aged 26 down to 16, with two already with Jesus. They have always been a homeschooling, homesteading family, and love being together. Currently, they reside in Tennessee on a small (very small) grass-finished beef farm, where they also are joined by 4 miniature Dachshunds, and 8 chickens.